Until further notice, City facilities other than City Hall will remain closed to the public. City hall will continue to provide access only by appointment. Residents interested in purchasing yard waste bags or tags can click HERE for information on retail establishments where they can be purchased. Contractor grade black trash bags in bulk can be purchased at most home improvement stores.

Kirkwood Electric & Kirkwood Water will not be doing shut-offs, and late fees for utility payments will be waived. Amtrak service has not been suspended, however effective May 11 all Amtrak passengers will be required to wear a mask (and provide their own when doing so).

Please call police dispatch at 314-822-5858 for general inquiries or for further assistance.  Other inquiries can be made by emailing info@kirkwoodmo.org

Stay up to date on changes to City services and facility closures from the City of Kirkwood HERE. Subscribe to Kirkwood's E-Newsletter HERE.

The Kirkwood Arts Commission was established in 2014 by the Kirkwood City Council, to promote the arts in the City and around the region.

Many thanks to Emmy Beaven who created the Kirkwood Arts Commission logo (above, right).

(Click on the image below to open a PDF of the poster._ 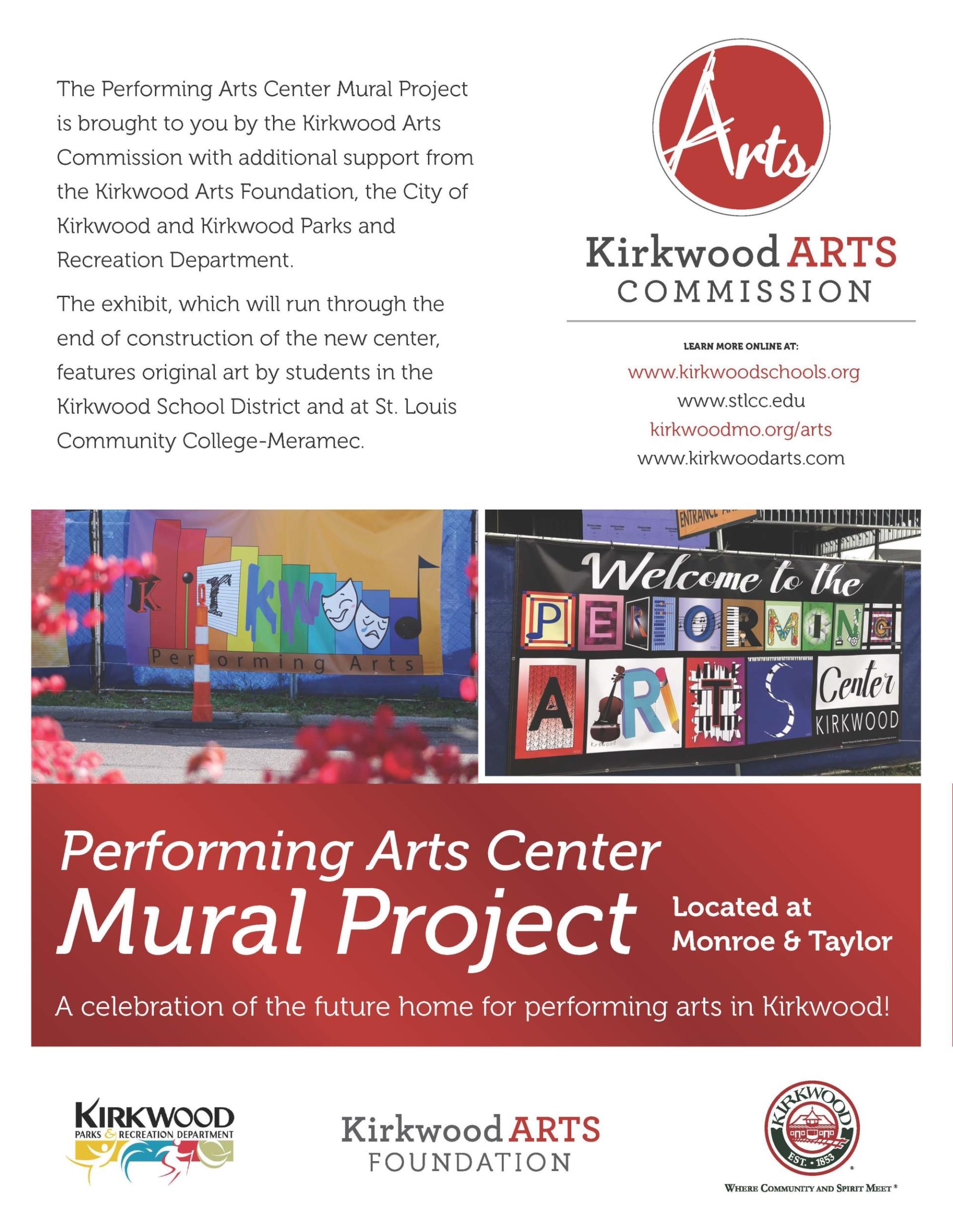 Board and Commission Rosters

The Arts Commission meets on the fourth Tuesday of every month, 5:00 p.m., at the Kirkwood Community Center, 111 S. Geyer Road.

Thank you to all who participated in 2019.  Beginning October 1, entries will be on display at United Missouri Bank, 426 N. Kirkwood Road.

Art at the Station

Everyone knows the Kirkwood Train Station. It's featured on the City's logo, locomotive enthusiasts come to watch trains pass, and its storm water problems have been well chronicled in the local newspaper. Since 2009, the Station has also functioned as an exhibition space for Art at the Station, a community visual arts program hosted and produced by the Kirkwood Arts Commission.

Sherry Salant’s work will be on display in October at Art at the Station, at the Kirkwood Train Station, 110 W. Argonne Drive.  Sherry creates organic mixed media pieces using alcohol inks, acrylics, and photography. Her website is www.sherrysalant.com.  Exhibits are free and open to the public. Artwork may be viewed when the Station is open for passengers.  This will be the last Art at the Station exhibit for 2019.

A 2020 schedule will be announced soon.

The Kirkwood Train Station is located at 110 W. Argonne Drive in downtown Kirkwood.

Kirkwood Electric will once again be the Presenting Sponsor of the Making Music Concert Series. Concerts are held in Kirkwood Park, in the Lions' Amphitheatre, at 7:30 p.m., on the dates indicated. Hosted by the Kirkwood Arts Commission and Kirkwood Parks & Recreation, with additional generous support from the Kirkwood Arts Foundation, the Willard Clifford Gaylord Foundation, and the Webster-Kirkwood Times.  (Note the new start time for the concerts:  7:30 p.m.)

New This Year:  Making Music will host a spring kick-off concert at the Lions' Amphitheater in Kirkwood Park on May 4 at 4:00 p.m.  This concert will feature:  Ross Bell Band, Rosewood, and Serapis.

The Summer 2019 Schedule of concerts in Kirkwood Park will feature the following:

If you would like to sign up to receive the Kirkwood Arts Calendar by email, with upcoming arts events and programming, please send an email to Arts@KirkwoodMO.org.

You can read the Public Art Policy developed by the Arts Commission and approved and adopted by City Council in April 2017.

Are you interested in becoming a volunteer with the Kirkwood Arts Commission?

Free viewers are required for some of the attached documents.
They can be downloaded by clicking on the icons below.